Swift Vs. React Native: Which One Is Better To Choose When Developing Your App for iOS? 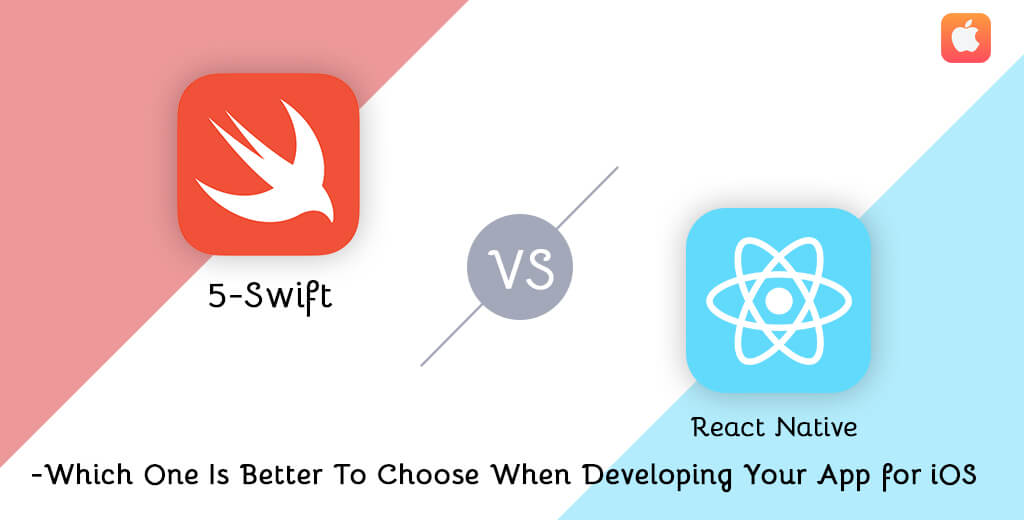 Well, there stands no doubt in the fact that the iPhone is not just a device. It is the mark of social standards for some people, and for some developers, it’s a dream to build an application for the iPhone. Apple is an ace brand that has revolutionized the smartphone industry with its first iPhone release back in 2007.

Over the years, Apple has created its powerful position to use its own programming language to develop applications. Swift is the programming language that is required to develop native applications. Now there are different platforms available, such as React Native for ios app development & mobile app development still, the frequently asked question is, which is the better platform- Swift or React Native.

EVERYTHING YOU NEED TO KNOW ABOUT SWIFT

Swift is a modern programming language launched by Apple back in the year 2014. This general-purpose language works smoothly for all the projects that require to have native iOS attributes, in-app payment, and other complicated infrastructures. It is said that if you create an application that is compatible with all the existing Apple products, then Swift is highly recommended.

It has 7.71k GitHub forks and 48.2k GitHub stars, and it supports Objective-C code also. Swift is a relatively new language that functions with Apple’s Cocoa & Cocoa Touch framework and is distributed on the Apache License. Below mentioned is the list of merits and demerits of Swift.

The typing and error detecting system of Swift is quite advanced, making the applications created via this language bug-free and exceptional. The error handling feature of Swift takes care of code crashing also.

in the year 2015, Apple declared Swift to be used as an open-source programming language for iOS. This has made the language more developer-friendly as fixing bugs, adding new features, etc. has become quite effortless.

Unlike other programming languages, there is no need to create different codes for similar tasks because Swift is a concise language.

Swift runs 2.6 times faster than Objective C programming language. This results in developing applications that are fast in nature.

Since it’s been only six years that Swift has launched, that’s why despite being an open-source community, it is not as strong and vast as it should be. Undoubtedly it is growing at quite a good pace, but many developers are working with Swift.

EVERYTHING ABOUT REACT NATIVE

React Native is a software architecture supported by Facebook. This language is based on JavaScript, and developers can use and share the codes created on different platforms such as iOS, web applications, and Android. The sharing features have reduced the developing time and cost for cross-platform mobile application development.

React Native has 17.5k forks on GitHub and 78.3k GitHub Stars. It is a much more established technology that is supported by Walmart, Facebook, Shopify, etc. Below are some merits and demerits of React Native:

You can consider the below-mentioned comparison in order to make your opinion regarding which programming language is better for your purpose:

Depending on the structure and type of the application that you wish to make, you can choose your programming language. You can consider HireIndianProgrammers’ services for ios app development & mobile app development; we are one of the leading experts in the industry. We have got the experience and a team of designers and developers for your project. Schedule a consultation today to discuss your requirements and we would be happy to serve you.