PHP vs Python: Which is better? 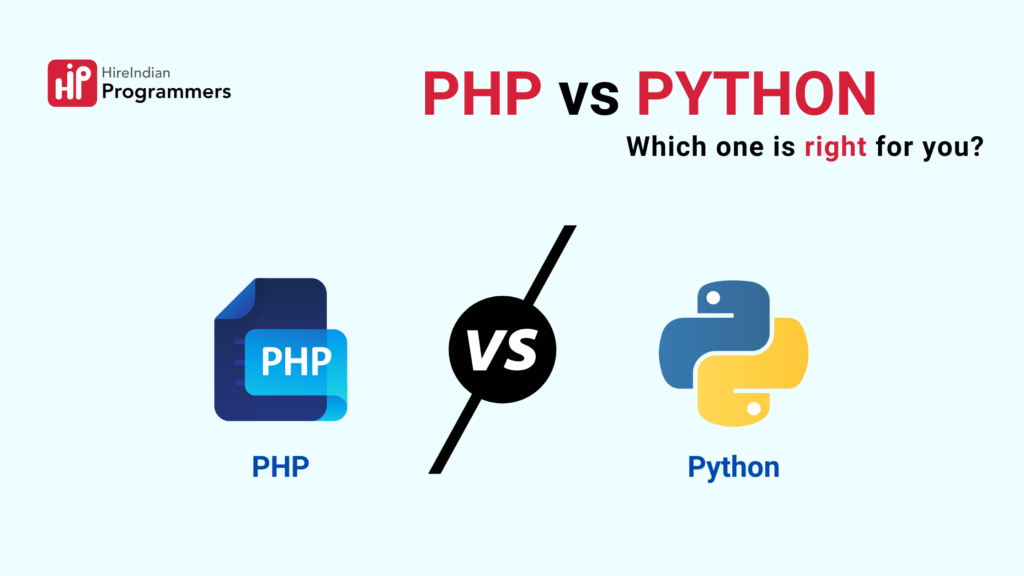 Choosing the right software development platform for your business project is vital for its success. There are a lot of programming languages you can use to create a website such as Java, C, Python, PHP and JavaScript.

Nowadays, Python and PHP are two programming platforms that most businesses like to choose from when it comes to web and app development projects.

Although many web portals exist with PHP as their foundation, libraries and frameworks in Python have become the first choice among many programmers for its pros.

So, which one is better than the other? Let’s look at how PHP and Python differ to help you decide which is best for your next project.

PHP is a server-side scripting language designed for web development but also used as a general-purpose programming language. It was designed for building dynamic websites using common gateway interface (CGI) scripts and accessing relational databases while providing a high-level means of controlling their parameters, data sources, and returned content.

PHP code may also be executed with a command-line interface (CLI) and can be used to implement standalone graphical applications. It was originally designed for producing dynamic web pages and has evolved to support a wide range of functions, including database integration, form processing, image manipulation and programmatic access to operating system components such as file systems and network interfaces.

PHP is used for:

Python is a high-level, general-purpose programming language. Its design philosophy emphasizes code readability, and its syntax allows programmers to express concepts in fewer lines of code than possible in languages such as C++ or Java.

Python supports multiple programming paradigms, including object-oriented, imperative, and functional or procedural styles. It features a dynamic type system and automatic memory management and has a large and comprehensive standard library.

Python is used for:

PHP has a much easier learning curve than Python does. PHP is the way to go for developers looking for a programming language to start learning and don’t want to spend too much time. They can get up and running with PHP much faster than one can with Python.

Python isn’t necessarily harder than PHP, but it’s much more verbose and takes longer to write code that accomplishes the same thing. So PHP is the way to go if a developer is looking for a quick solution without having to learn syntax.

ML-powered web apps are in high demand these days. And they are a significant point of Python. Thus the language provides excellent libraries, which can make web development easier, such as Pandas, Tensorflow, Theano, and Scikit-learn. These libraries are rapid, robust, and unique, and most significantly, they can effectively work with web frameworks.

Python is beneficial in more ways than PHP, mainly with web-related work, where PHP has importance. Python can be applied to many other fields, whereas PHP is important only in one field – the web.

3. PHP vs Python: Speed to market

Python features an incredible set of third-party technologies that can accelerate your project by providing the tools necessary to complete application development. For example, Django is a popular web framework written in Python. The structure and design of this framework help the developers develop apps faster with seamless responsiveness and all the new upgrades it comes with, allowing for greater customizability and scalability.

PHP is a rather popular programming language influencing web technologies in various ways. For example, Laravel, one of the most famous frameworks for the PHP programming language, makes it simple to write robust code and comes with several helpful features like an efficient routing pattern (MVC), templating features and so on.

The two languages have different approaches to web frameworks. PHP has many options, with frameworks like CakePHP, Laravel and Yii2 leading the way.

Python has limited options, with Django being the most popular choice among developers today. It is highly scalable, fast and easy to use, and secure. Developers find that Django-based frameworks offer a fast setup and shorter development period than when using the PHP-themes framework.

Debugging in Python is a bit easier than debugging in PHP but there isn’t much difference between the two. Python has dynamic typing that lets the developer type in commands to execute code directly. A developer doesn’t have to run your program every time they want to test it, which saves time and effort.

It’s estimated that around 80% of websites use some form of PHP. This includes large sites like Facebook, Wikipedia and WordPress, which all rely on PHP to power their content management systems (CMS).

Python is a programming language used by companies like Google, Instagram and Quora for many years. Since 2016 its popularity has been rising, and it’s working its way up. It has more Github Stars than PHP.

PHP and Python both have fantastic community support. PHP has been around for a long time for web application development, which means many PHP developers know how to help the developers out when troubleshooting various issues.

Meanwhile, Python also has a lot of developers who build with it constantly, creating a huge community of experts eager to help. It’s virtually impossible to say which one is better since the two offer similar levels of community support.

PHP is a great language for creating dynamic websites and applications. However, PHP security has been questioned over the years, and it can’t compete with other languages in terms of security. Python is one such language which provides better security features than PHP.

Python is the most popular language for coding in today’s business world, and many companies use it to build applications that solve big problems. For example, Django – a Python web application framework, includes many pre-built security features that protect your apps from threats. Government entities also use Python to build their hacking tools.

It’s easier to integrate databases in PHP than in Python because of the many database libraries available for Python. The most popular library for connecting databases is SQLAlchemy, which supports most major databases. However, a developer using MySQL or MariaDB can use the MySQLdb library to connect to the database.

While Python isn’t considered as popular as PHP, it was explicitly built for speed. Therefore, when code is compiled and written in Python, it takes a significantly shorter time than its counterpart.

Python is a backend development language used for creating websites. It’s very versatile but generally doesn’t work well for everything. PHP is also great for websites as it works well as a backend scripting language, but there are limits to how much logic could be implemented in PHP, which makes it not the best choice for other types of development.

PHP vs Python: Which is better?

Both PHP and Python are excellent programming languages, but each has strengths and weaknesses. PHP is object-oriented, while Python is sometimes considered a combination of an object-oriented and a procedural language (although this depends on how it’s used).

One strength of Python is its straightforward syntax. On the other hand, PHP has some additional features for developers unavailable in Python (like namespaces).

PHP or Python Developer: Hire the One Based on Your Needs

To get the most out of your money, you need to hire an agency that can help you streamline the process and find suitable candidates quickly.

HIP is an agency that helps businesses find developers with the right skills and expertise. With HIP, businesses can hire experienced PHP/Python developers at affordable prices.

We offer employers access to a wide selection of highly-skilled professionals vetted by our team of expert recruiters. We do this through an extensive screening process that ensures only those candidates who meet your needs will be contacted.